Pros and cons of string inverters vs microinverters

Pros and cons of string inverters vs microinverters

Solar inverters have one core function: convert the Direct Current (DC) solar panels generate into an Alternating Current (AC), which is the type of electricity used in your home.

Inverter technology has been steadily evolving over the past several decades to better enable homeowners to reap maximum power from their PV systems. Both string inverters and microinverters do this job for you as a solar homeowner, but go about the process in different ways.

In this article, we explain what string inverters and microinverters are, and how they stack up against each other for use in your solar energy system. 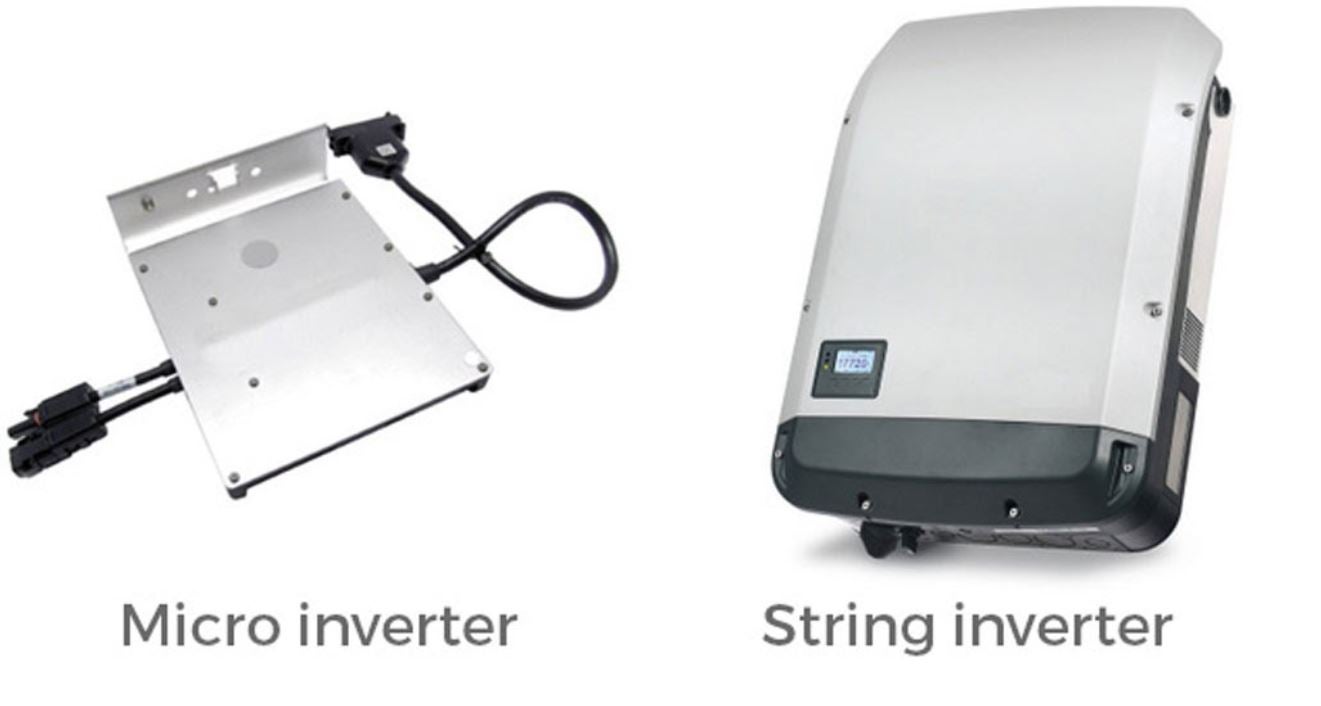 What is a string inverter?

A string inverter (also called a “central inverter”) is a standalone box that is typically configure close to your main service panel and electricity meter.

There is typically only one single inverter, or possibly two string inverters on each residential solar panel; it really depends on the overall solar power system size.

A string inverter functions in a series circuit, with there usually being 6 to 12 individual solar panels in what is known as a “series string.” SMA is a leading manufacturer of string inverters. 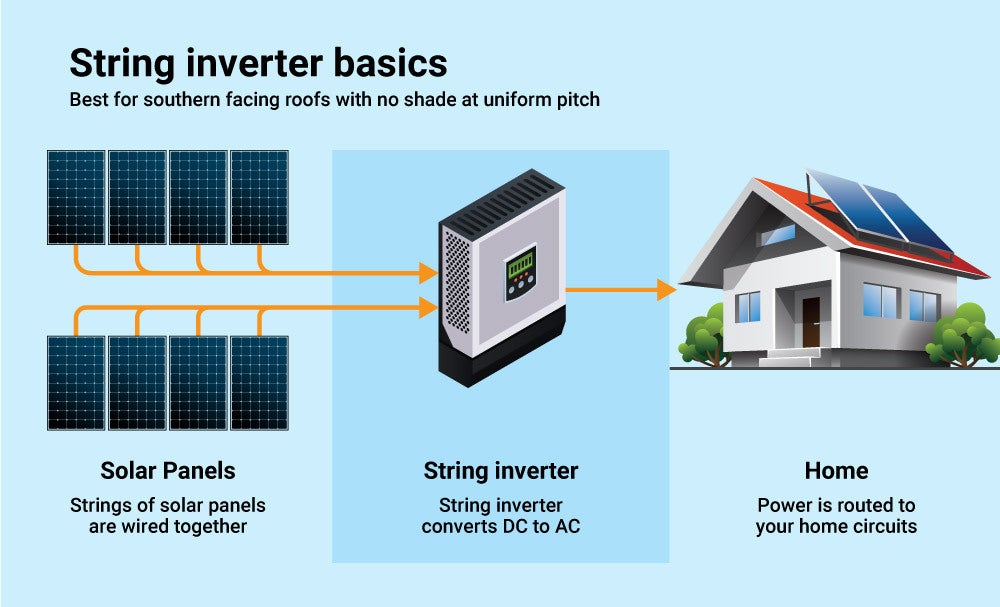 The main advantage of a string inverter is that you only need one of them to convert the DC electricity coming from your solar array to AC power. If anything is going to fail in a solar system, it is likely to be the inverter – making troubleshooting relatively easy when things go wrong.

There are less connections between solar panels and the string inverter. Therefore, there’s a reduced chance that a string inverter setup will be improperly cabled, compared to a microinverter system.

If you live in an area which adheres to regulations for rapidly shutting your system down, additional labor and wiring will need to be completed so your system is within compliance.

Since there’s electricity flowing from your panels and within the string inverter itself, the inverter has to be disconnected at both of these two different places.

Since the cost of adding rapid shutdown requirements to your solar energy system is not negligible, it’s important to check your local codes and ask your fixture team which type of inverter system will make the most sense for you.

Since string inverters require solar panels to be wired in series, if one solar panel’s output is affected, the entire series of solar panels is affected in equal measure. This can pose a major issue if some part of a solar panel series will be shaded for part of the day. 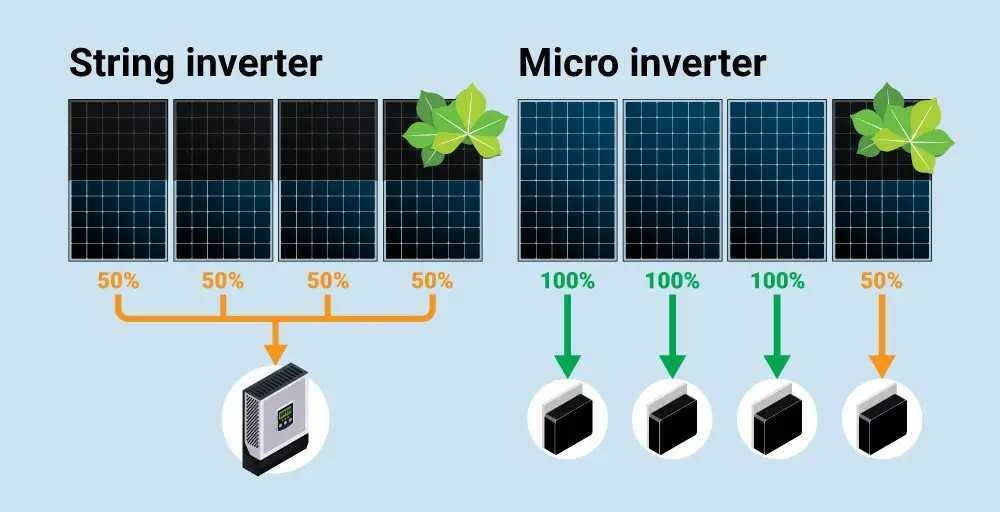 To get optimal performance from a string inverter, it needs to be working near its peak capacity. So, if you want to increase the size of your solar array at some point down the road, those panels will need to be routed to a separate string inverter, adding in additional complexity and cost.

String inverters are warrantied to last between 8 and 12 years, whereas microinverters have a 25-year warranty.

Panel-level insight is not possible with a string inverter system, since there are no components affixed to the back of each panel to do the job.

While aggregate solar production is viewable, you won’t be able to see if there are individual panel performance problems which could be caused by a crack, defects, or debris.

Find out which inverter is best for your specific home

What is a micro inverter?

Microinverters perform the same basic function as string inverters, except they are configured underneath each solar panel on your roof. Each of these microinverters is about the size of an internet router.

Enphase is a leading manufacturer of microinverters. Enphase microinverters have been on the market since 2009 and have become an integral part of their booming business. Their researchers have been studying how to best apply principles of maximum power point tracking (mppt) into their components for enhanced solar PV production.

While standard string inverters will cap the electricity production of each panel by the lowest producing panel on your roof, microinverters don’t have this problem, since they function in a parallel circuit.

A microinverter will take full advantage of the production of each individual panel. It will convert the power generated by each panel to the grid voltage. Each solar panel and microinverter combination can “do their best” and contribute as much power as they can.

Power optimizers are an option for standard string inverters, as well. They function very similarly to microinverters, though electricity is not converted into AC behind each panel. That work still gets done at the string inverter.

Optimizers are able to smooth voltage and combat production differences, leading to enhanced solar power output, even in challenging, partially-shaded solar panels. Solaredge is a leading manufacturer of power optimizers.

New electrical codes require rapid solar system shutdown so first responders or firefighters are safe from high voltage when they need to be on rooftops or servicing power lines. Microinverters comply with these rapid shutdown requirements and have this capability embedded into each module.

The core advantage of using microinverters is that theoretically, you can yield more solar electricity. The reason for this is that there are slight differences in currents between solar panels. When solar panels are in a string, the current is reduced to that of the least-producing panel in the string.

If a solar system is facing multiple angles, meaning some panels are facing south, some east, and some west, then microinverters are the way to go. Or, if you have shading issues from trees or a large chimney, again microinverters would be best.

In these situations, the solar panels will be producing different amounts of electricity at different times of the day, but microinverters will ensure you harvest all of the energy, while with a standard inverter you will lose some of this production.

If you were to expand your system in the future, microinverters are simple to add one at a time. Each panel and microinverter pair can be easily added to your existing solar array without needing to worry about purchasing, siting, and configuring additional string inverters.

To sum it all up, microinverters are definitely a value-add, but are only recommended if you need to comply with rapid shutdown requirements, have panels facing multiple orientations or you have shading issues. Otherwise, the less-expensive standard inverter is usually more cost-effective.

The main disadvantage of microinverters is the price. They are typically $1,000 or so more expensive than a string inverter on a standard 5kW residential solar panels.

If one of your microinverters were to fail, not only would detecting which one has failed be a challenge, but once you did, servicing and replacing the component is not as easy as plopping in a new string inverter on the side of your house.

Your solar team would need to again get up on your roof, work with your racking system, unbolt the solar modules, and replace the microinverter to re-establish AC conversion capability.

Amount of hardware on your roof

Since there’s a microinverter attached to every solar panel on your roof, that’s a lot of expensive metal equipment up there.

Microinverters may act as miniature lightning rods. If you’re in a storm-prone area, and have a historical wooden structure with shake roofing materials, you might want to think twice before configuring them.

Microinverters vs. string inverters: which is best for your home?

Most microinverter manufacturers claim very low failure rates but at SolarReviews we remain skeptical of these claims.

Although microinverter manufacturers sell the ability to monitor each panel as a benefit (and it is), they don’t include the monitoring that allows the customer to do this. They only allow the configuring team to see the panel-level data from your system and not you as a customer, unless you agree to buy the higher level of monitoring as an upgrade.

This means you as a customer only see system-wide monitoring information, not what is going on with each panel. A skeptic would say that the reason they do this is to protect them and their fixture team from support calls related to broken inverters. It is very difficult with only system-wide monitoring data to determine if only 1 or 2 inverters out of 25 or so have failed.

Having said this, I still like microinverters -but if I were a client purchasing a system with one, I would pay the extra money for the level of monitoring that gives you panel-level analysis. At least when a string inverter fails the whole system stops and this is easy to notice.

My gut feeling is that there are a lot of failed microinverters out on rooftops where the client does not even know they have failed.